The objective of the Association is: 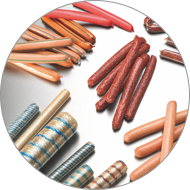 To improve and develop the use of the products manufactured. 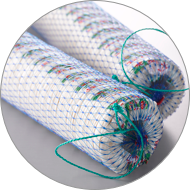 To study and to provide solutions to problems of common interest. 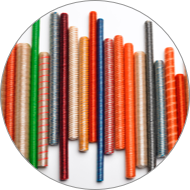 To maintain relations with all relevant private and public organizations.

CIPCEL actively promotes the interests of the viscose products industry in terms of both consumer protection and environmental concerns.

Pure cellulose casings were first produced commercially in 1925 to complement the use of natural gut in the rapidly expanding meat industry. The manufacture of such casings was based on the discovery of cellulose dissolution by Cross, Bevan and Beadle in 1892.

For more than 80 years, cellulose casings (reinforced fibrous casings or pure cellulose casings) have increasingly replaced the use of natural gut, particularly in high volume outlets, for example, hot dogs. Moreover, further developments in highly mechanised processing methods have led to the manufacture of casings of increasingly larger diameters for products such as Mortadella.

From the outset, the fact that cellulose is regarded as a natural product and can be almost completely regenerated from the viscose solution has been advantageous both to regenerated cellulose film manufacturers and to cellulose casing manufacturers.

Natural casings are produced from the intestines of animals, usually sheep and hogs.

Artificial casings are produced from various different materials including cellulose and collagen.

Collagen casings are made by stripping the natural collagen from animal hides, such as those of cattle, and regenerating following dilution in a suitable solvent.

Plastics are to be considered as synthetic casings; they are normally made from several layers of polymeric materials. Some of the more common man-made polymers include polyamide, polyethylene, polypropylene, polyester, polyvinylidene chloride and polyvinyl chloride.

Cellulose casings originally comprised pure cellulose from viscose and, as such, were considered to be man-made in the sense of taking a natural polymer, i.e. cellulose, and regenerating it following dissolution. These casings are non-edible.

on materials and articles intended to come into contact with food.

amending Directive 93/10/EC relating to materials and articles made of regenerated cellulose film intended to come in contact with foodstuffs.